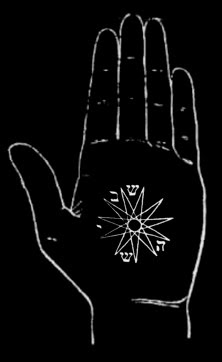 The value of this contraction is 617 and 5 is its central wheel as represented by the ה  on which the
key stands while the double specular ש  determine the radical nature of this system; from the pure
instinct without power of beth the double fires interact through ה .

This event opposes the oscillation between Maatian reality and chaotic counterpart to the empty malleability of תְּהוֹם .

The activation of the powers of matter through matter itself is the Assianic way used by the key 617, ב and י  at the ends of the formula act through the flesh in a venereal way.

The Assianic endecagram in which the Key 617 is inscribed indicates the nature of this method, an antithetical impulse against what is perceived as cyclic or unchangeable channeled in the material energy currents.

> The black body - ב: the "mercurial force" of transformation, the instinct to KHPR

> The square - ש : the trident of the sitra hara, the first chthonic fire

> The red tongue - ה : the window, the medium through which the two fires work. Tiamat's hand.

> The Flesh - ש : the dynamic force of anti-creation. Its interaction with the first chthonic fire activates the unmanifest yod.

> The uterus - י : the destroyer of finite forms. The hammer of Set-That-Destroys-I-Suns, the djed.

The hand of תְּהוֹם  is the interruption of thought in its cause-effect coordinates and the awareness of not being involved in the creation, every perception related to matter therefore becomes an act of abolition of cyclicity which seems to compose matter itself in favor of a tendency to acausality which is property of the concept of תְּהוֹם, Tiamat and the primordial waters that represent it contain the root thm of תְּהוֹם , the pre-existing condition of the manifest universe.

The key 617 and the mechanics of the Current 309
were activated in their Anti-path 26 during a series of acausal operations which took place between 12 August 2014 and 29 July 2015 and registered as Anti-Opus 743.


"Earth, give back
the good you have hidden
unroll, dragon, your carpet
snake, come back
in the light of Set